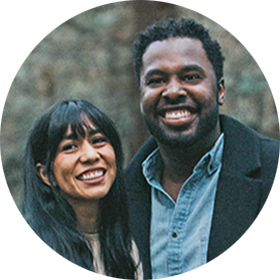 Marlon and Rebecca Brown met at Bible College, where they shared a thirst for the Word of God and a deep love of Jesus. Soon, they married and in 2009 the young couple moved to Boise to serve at Calvary Boise. Because they felt called to be future church planters, Calvary’s strong emphasis on local and foreign outreach was important to them and inspired their move to Vancouver—one of North America’s most diverse cities—where they fulfill their fervent desire to reach a lost world with the Good News of Jesus. View the most recent video update.

Vancouver—Canada’s third largest city—is a beautiful, prosperous community nestled beneath British Columbia’s coastal mountains. People from all over the world make up its population. English is a second-language for 52% of Vancouver’s 2.4 million residents. On the surface it appears that Vancouver has it all. But its citizens desperately need Jesus Christ. Less than 5% of the population identifies as Christian. Most people embrace and even celebrate atheism and secular humanism. In 2014, Marlon and Becca Brown left Boise to bring the truth of the Gospel to this hard mission field. Pray that God will enable them to change hearts and bring awakening.